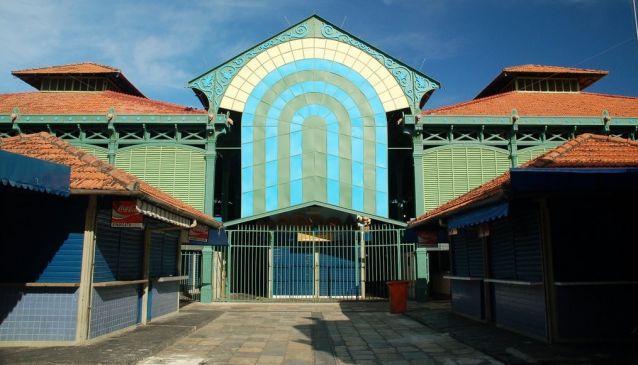 At first named Ribeira do Peixe or São José, the use transformed it into simply São José Market. In 1787 there was a small place that traded fruit and vegetables.

The Ribeira Market, as it became known, was built in a sandy area by the beach, near the monastery of the Capuchin Monks, where the fishermen were accustomed to selling their fish. It was made of bricks, with the roof supported over arches and columns, composing a square plaza with 62 small houses and 128 stalls.

In 1872, the President of the Pernambuco Province Henrique Pereira de Lucena determined the demolition of the Old Ribeira and the construction of a new market.

During the administration of the major Colonel Martins de Barros, in 1906, the first conservation repair of the market took place. The work included the internal wood compartment recuperation, as well as all the casings, glass work and its frames.

In 1950, during the administration of the Mayor Moraes Rego, new renovations replaced the wooden blinds for cement. In 1975, its centenary year, a soccer tournament was organized as a part of the celebrations. This tournament has occurred annually since then.

The more the centenary the São José Market remains intact, ready to receive its visitors: people, who go just to stroll, visit or buy things. They are tourists, local visitors, students, housewives, and salesmen, all looking for the best and for the cheapest prices.

Actually, there are 561 covered stalls and 80 compartments in the external area, with other 24 fish stalls, 12 crustacean ones and 80 of meat, a total of 757 points of business, more diverse than imagination allows.

In addition to fantastic fruits and vegetables (some known, some unusual), there were lots of local handcrafts to buy, fresh fish, a butchery, clothes, leather goods, raunchy touristy mini-statues, fresh flowers and a also wonderful local experience.

You can have direct contact with local culture. Besides being able to find items of the northeastern cooking, there are several craft shops inside.