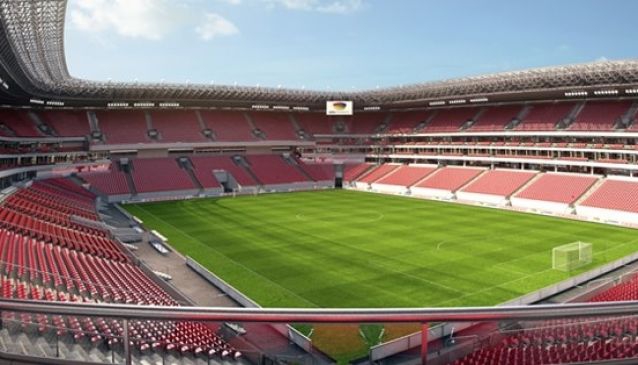 The Arena Pernambuco is a 46,000 seat purpose-built ultra-modern football stadium, part of a world-class entertainment complex, opening in May 2013 just outside Recife.

In addition, there are 102 comfortable corporate boxes, a format allowing total visibility for all spectators and close proximity to the pitch, 42 bars, 71 toilets, 8 lifts, 13 escalators on six levels, as well as 4,700 parking spaces. In summary, the best sports viewing experience ever seen in Recife and one of the best in Brazil for all the family to enjoy in safety and comfort.

The stadium will host 5 important matches between 14th and 29th June 2014 - we will post more details of the Groups and Teams as they are confirmed.

During the Confederations Cup, in June 2013, the Arena Pernambuco hosted three important Group B matches, with the following results:

Brazil went onto convincingly beat Spain (3-0) in the final at the fully modernised Maracanã stadium in Rio de Janeiro.

Apart from the football tournaments in 2013 and 2014, the Arena will be used for shows of top Brazilian and international artists, other sporting events and conference and business events.

From July 2013, it will be the home ground for Nautico - one of Recife's 3 big teams and currently in the Brazilian Championship league (Brasileirão 2013).

The 2 other big local teams, Sport Club and Santa Cruz, are negotiating rights to play some or all their games at this stadium from October 2013 onwards.

Built under a partnership between leading Brazilian construction group Odebrecht and the Pernambuco State government (PPP-model), which ensures top class facilities and cutting edge technologies, all up to FIFA's demanding standards.

The stadium is installing a solar energy plant able to produce 1MW of energy, sufficient for the needs of 6,000 consumers.