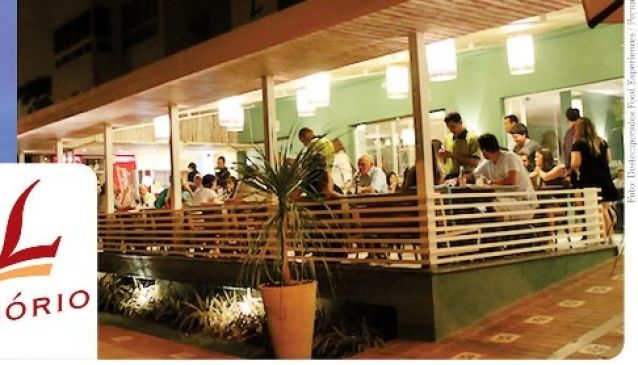 Liborio Praia opened December 2012 in the south of Boa Viagem district with a more laid-back rustic/retro atmosphere compared to its well-established sister in Aflitos district, central Recife. The new bar/restaurant is in the largely residential area of Setubal, a sub-district at the south of Boa Viagem beach bordering Piedade - and cleverly situated just 200 metres from the increasingly popular Dona Lindu Park and 100 metres from the beach, hence its name.

Gastronomy and good service for all the family is what the owners Marcelo Liborio and Alexandre Gueiroz rightly pride themselves on in their two establishments - they are often to be seen doing the rounds in the bar/restaurants and giving tips on wines and dishes. A fusion menu of favourites such as thin crispy napolitana-style pizzas, crepes, steak, seafood and salads, as well as new inventions signed by the well-known local chef Douglas Van Der Ley.

Their mottos are elaborately produced dishes at a reasonable price with quality ingredients, good service and a varied drinks menu including a wide selection of wines from their well-stocked carefully-chosen adega.

Several environments cater for their varied public - an airy varanda, a main air-conditioned hall, a cozy adega and a side-area near to the childrens' playground.