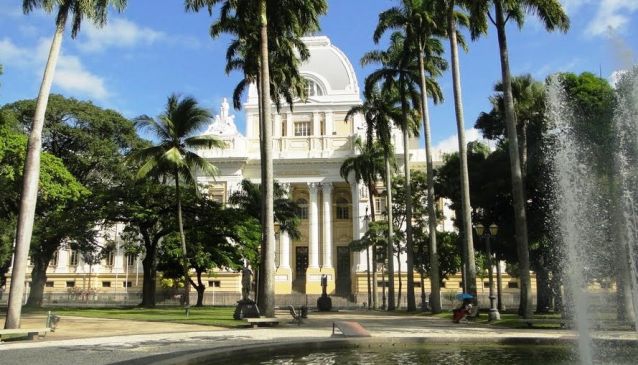 Is the headquarters of the Pernambuco Judiciary and houses the rooms and offices of the State Justice Tribunal. It was inaugurated on 7 September 1930 during the Estácio Coimbra government and evidences a monumental neoclassic style.

Designed by the Italian architect Giacomo Palumbo, the construction of the Palace took around six years to be finished. The building was completely finished during the Carlos de Lima Cavalcanti government: the purchase of furniture and final touches in the building's areas.

The Palace covers an area of 2,506m2 and is five storeys. The dome is slightly lower than it was supposed to be in the original design. The stained-glass windows were made by the German Heinrich Moser and represent the first State Legislative Assembly, built by Count Mauricio de Nassau, governor of the Dutch Brazil, during the Ducht period.

The german Heinrich Moser is also the painter of an image that represents Justice that can be seen in the current main courtroom of the Tribunal. You can visit the Noble Hall, on second floor, with rich furnishings and the marble lobby with ornamented ceilings, large candlesticks, sconces and chandeliers.

The building is situated around Praça da República Square near the Santa Isabel Theater and the State Government Palace.  It is a mandatory stop for tourist in Pernambuco.